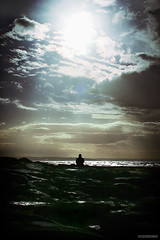 I and my Father are one. Then the Jews took up stones again to stone him. Jesus answered them, Many good works have I shewed you from my Father; for which of those works do ye stone me? The Jews answered him, saying, For a good work we stone thee not; but for blasphemy; and because that thou, being a man, makest thyself God. Jesus answered them, Is it not written in your law, I said, Ye are gods? If he called them gods, unto whom the word of God came, and the scripture cannot be broken; Say ye of him, whom the Father hath sanctified, and sent into the world, Thou blasphemest; because I said, I am the Son of God? If I do not the works of my Father, believe me not. But if I do, though ye believe not me, believe the works: that ye may know, and believe, that the Father is in me, and I in him. – Jesus Christ to the Jews (KJV—John 10:30-38).

I will be his father, and he shall be my son. If he commit iniquity, I will chasten him with the rod of men, and with the stripes of the children of men. – Nathan with the word of God to King David (KJV—2 Samuel 7:14).

The reasons for undertaking this work are infinite. This work covers highly controversial, pivotal political truth that divides the world and upon which you must unhesitatingly act to save your soul and the world through conflating the souls of billions. It is revealed truth and necessarily supported by a proper reading of scripture. The truth is, every time I asked the question as to what I should do with what was revealed, the answer came back instantly and emphatically, "Write the book."

I am using the 1987 printing of the Authorized Version (AV) {versus the Revised Version (RV)} of the King James Version (KJV) of The Bible for this work, because The KJV is in the public domain in the United States without qualification and is in the public domain in the United Kingdom provided it is used in commentary form. The KJV is an English translation of The Bible from Hebrew and Greek and was first published in 1611 under the auspices of James I, king of Great Britain.

There are controversies raging at the time of this writing about which version of The Bible is the most accurate. There are Biblical scholars who are Fundamentalists (believe in the literal interpretation of The Bible) and earnestly believe that the KJV is the only Bible extant written directly by God through the hands of men. Their position is known as the King James Version Only position. There are gradients of this position. There are other Biblical scholars who insist that scripture has been subject to so much editing and language translation making it well-nigh impossible to have an exact version of the original scripture. These positions by no means sum up all the views on this subject.

The KJV makes use of the term "Father" for God. The use of Father in lieu of God should not be construed as sexist. Jesus said, "For in the resurrection they neither marry, nor are given in marriage, but are as the angels of God in heaven." (Matthew 22:30). This renders gender issues moot. People of any gender may become full members in the family of the spirit. This includes eunuchs and hermaphrodites. The kingdom is genderless. Procreation is unnecessary. It is transcended.

Concerning ellipses, I have foregone adding traditional ellipses at the beginnings and endings of every quote from The Bible. I have used them within quoted material where I am aware that words have been left out. For consistency of punctuation and to not confuse readers with seemingly inappropriate terminating punctuation within quoted verses, I have used periods as the terminating punctuation in lieu of colons, semicolons, or the like used in The Bible where the material continues. Also, I have removed the verse numbering in line with the text to make reading flow more readily for the sake of emphasizing comprehension. To any purists who might take exception to doing that, I remind them that the numbering is not in original scripture. I left all spelling, verse‑leading capitalization, and all punctuation internal to verses unchanged. Lastly, wherever straight brackets are used to set off language within verses, that set-off language is an editor's insertion for the sake of contextual clarity. Straight brackets look like this [ ].

I wish to acknowledge the contribution my daughter, Mary "Audra" Usher, made to this effort. She was just beginning her teen years when I developed a single vision concerning this work. It wasn't easy for a young girl to watch her father work at home non-stop in search of the answers and then watch him write this work. She had to adjust so the home would be conducive to the work of opening up the scriptures and revelation for the sake of righteousness. Now that the work is done in terms of this first edition, I trust once she reads it, she will see even more clearly how it was all very much worth the sacrifice.

I wish also to acknowledge my mother's (Mildred Irene Usher) contribution. Without her generosity, this work would not have been possible.

As you read this work, the dualistic relationship you ought to have with all your fellow human beings may unfold for you. May you be worthy to forsake anyone and everyone for the sake of righteousness. "Can two walk together, except they be agreed?" (Amos 3:3).